Our company was founded in 1962 by Gerald A. Mason following the acquisition of a small farm-holding at Swineshead; included in the purchase were two small cattle trucks complete with the A & B licences required to run them. The intention was not to use these vehicles but to develop the farm, but when customers started asking for cattle, sheep and pigs to be moved to market, the opportunity for extra revenue to supplement the farm income could not be turned away.

The rest as they say ‘is history’ and by the turn of the decade Gerald A. Mason Transport as it was formerly known, had, despite strong competition from established companies, developed into a thriving livestock transport business, supplying transport of stock from farm to market and on to the abattoir, and helping to cope with the large import business of cattle from Ireland at that time, and also overnight housing of stock at its Swineshead premises.

By the early seventies a move towards potato transport had begun, initially in bags but with Gerald’s keen eye for an opening, he had the foresight to have two new potato bulkers built to his design to coincide with the opening of new potato processing and chip factories across the country, as a result becoming a pioneer in the movement of potatoes by this new mode. The business continued its growth into the eighties, both with transport of livestock and agricultural produce; and cattle breeding and fattening intensively at its Swineshead premises. In 1982 the business was incorporated into a limited company and renamed Mason Bros Transport Ltd with the introduction of Gerald’s three sons Christopher, Richard and Jonathan becoming more involved with the day-to-day running of the business.

The 1980’s saw a dramatic decline in the numbers of livestock on Lincolnshire farms so inevitably this side of the business was to decrease as the bulk potato and onion side was to become the mainstay of the business. 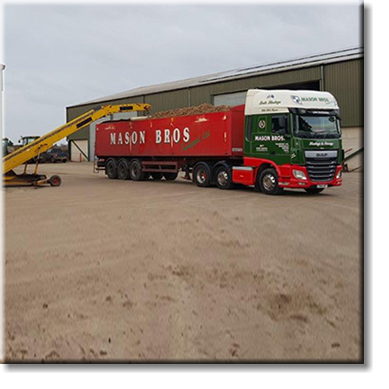 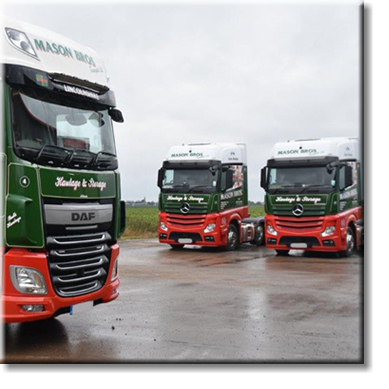